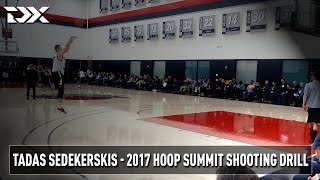 Mike Schmitz
@Mike_Schmitz
Tadas Sedekerskis, Lithuania, SF, Vitoria, 19.2 Strengths
-Excellent size for a wing prospect at 6' 9.75 in shoes. Solid frame that he's done a great job of maximizing. Not overly long but measured an 8' 10 standing reach, which, if accurate, would allow him to play some small-ball four like a Sam Dekker type.
-Fluid athlete who can play above the rim in space. Great in transition. Runs the floor hard. Can fill the lanes or push himself (although his handle is a bit rigid).
-Aggressive straight line slasher. Attacks closeouts with long strides. Doesn't shy away from contact.
-Nice overall feel for the game. Knows how to play a role. Experienced for his age. Can make the basic pass. 2.7 lifetime assists per 40 minutes.
-Streaky but developable shooter with time and space. Lifetime 32.4% from three and 74.6% from the free throw line. Gets good rotation.
-Very competitive defensively. Willing to check multiple positions. Plays with toughness. Solid feet on the perimeter. Good lower body agility for his size. Will battle in the post vs bigs. Sticks his nose in for rebounds. Finds ways to impact the game even if he isn't scoring.
-Moves off the ball. Crashes the offensive glass. Does a lot of little things that don't show up in the box score.
-Mature approach overall. Good teammate.Weaknesses
-Nice frame but not overly long relative to his height (6' 9.5 wingspan). Measured a big reach but questions remain regarding how much four he can play at the NBA level at 211 pounds with a sub-par wingspan.
-Not a reliable spot shooter. Needs time and space. Slight side to side movement at the top of his release. Forward jumper. Gets rotation but not a natural shooter. Easy to run off of spots. Doesn't have a lot of confidence in his catch and shoot three vs lengthy closeouts.
-Travels while attacking closeouts. Fluid after he puts it down but shuffles his feet when run off spots. Too sped up vs pressure.
-Handle is raw. Ball slows him down, even in the open court. Carries vs pressure. Not a guy who's going to regularly play out of a ball screen or create in the half court. Best in transition or as a straight line slasher/cutter. Not a guy who's going to get to his jumper off the dribble. Driving to finish not to pull up.
-Lack of elite length limits him a bit around the rim at times. Can improve his off hand as a finisher.
-Does a lot of little things well but what is his elite skill? Good athlete in Europe but tools and athleticism aren't exceptional at the NBA level.
-A bit too upright defending the perimeter at times. Can he check NBA-level wings consistently?Outlook
All week long Sederskis impressed with his positional size, fluidity, intangibles, and toughness, proving he's certainly draftable in the second round whether it be in 2017 or 2018. He may not have an elite skill and didn't exactly take the Moda Center by storm during game play but the Lithuanian forward is an ideal draft and stash candidate as he continues to develop his shooting stroke. He'll have to make shots consistently to carve out a role in the NBA, but Sederskis did help himself a bit with his steady play on a World Team that was otherwise quite underwhelming.

DraftExpress
@DraftExpress
The most battle tested player on this year's World Select Team, Sedekerskis is not particularly long, but his size and solid frame has played a role in his ability to earn playing time with Baskonia this season in both the ACB on Euroleague.  A versatile forward with a high basketball IQ, Sederkerskis is not the most explosive athlete or impressive physical specimen overall, but he is strong, tough, possesses elite intangibles, and showed well against the type of competition he'll see on the USA team as one of the only European players at the 2016 NBPA Top 100 Camp.  At nearly 6'10 in shoes, he has ample height to play at power forward when paired with his perimeter oriented skill-set, which gives him nice versatility despite his lack of length.
Read full article

Matt Williams
@DraftExpress
On the European front, Tadas Sedekerskis gives the team some much needed positional versatility, with his ability to play anywhere from 2-4 or even as a ball-handler in a pinch. The Lithuanian is a decorated and experienced player at the international level, with four FIBA events under his belt despite having just turned 19, including a strong showing at the U18 European Championship in Samsun, where he helped his team reach the Gold Medal game (where they lost to Frank Ntilikina and France). He even has experience playing in the more up and down American youth-settings from his participation last summer at the NBPA Camp in Virginia. Sedekerkis has great size (standing somewhere between 68 or even 69) for the wing, an excellent feel for the game, and real toughness that manifests itself defensively and on the glass. He is a talented ball-handler who loves to push the ball off the defensive glass, and has already seen some minutes playing in the ACB and Euroleague. He was expected to be more of a candidate for the 2018 or 2019 NBA Drafts due to his inconsistent playing time at the pro level this season, as well as his streaky jumper, but this event could change things as hell likely have a featured role.
Read full article

Strengths:
-Has solid physical tools for the small forward position. Great size at 6'8 (possibly taller in shoes). Strong frame.
-Intelligent and versatile player who contributes in all facets of the game and can operate anywhere from the 2-4 positions
-Talented with the ball. Attacks the rim with both hands. Aggressive in early offense. Likes to push the ball off the defensive glass
-Operated as somewhat of a point forward for Lithuania at times, averaging 3.8 assists compared with 2.7 turnovers. Sees the game at a high level
-Passes on the move. Has good vision and is very unselfish. Uses both sides of the court. Shows versatility in his ability to move the ball.
-Has some ability to punish weaker defenders in the post.
-Goes out of area for rebounds on both ends of the floor. Averaged a very strong 10.2 per game at U18s
-Shows timing and feel making plays defensively. Averaged 1.4 steals and 1.6 blocks per game at U18s.
-Moves his feet and has good timing contesting shots. Doesn't bite for fakes.
-Has strong intangibles. Serious minded and competitive on and off the court. Looks likely to reach his full potential
-Career 75% FT%. Has demonstrated the ability to make a spot-up 3 in the past. Not a non-shooter

Weaknesses:
-Has average length. Not an exceptional athlete on top of that
-Just how good of an outside shooter is he right now, and how good can he become? Was 0-14 for 3 at this tournament, and just 11-22 from the free throw line. Has never been considered an elite shooter at any stage. 26% of career FGAs in 104 games have come from beyond the arc. 33% 3P% accuracy rate overall.
-Shooting mechanics are not a thing of beauty. Pull-up in particular takes a while to get off.
-Lacks a degree of explosiveness off the bounce. Struggles to create high percentage looks in the half-court at times
-Physically mature already. Lacks a degree of long-term upside due to his average athleticism. Some may question what he can hang his hat on in the NBA.

Outlook: Long-time leader of the Lithuanian national team, already played his fourth junior tournament at the FIBA level. Got off to an exceptionally hot start, but was slowed significantly by a nasty bout of the flu was clearly took a lot out of him in the knockout rounds, and likely prevented us from seeing his best. Still helped Lithuania overachieve by winning a silver medal at the competition. Had a very strong preseason for Euroleague team Baskonia, and saw some decent playing time early in the season, but has had a difficult time getting on the court since. Will be a longtime NBA player if he can find a way to become a consistent outside shooter, as he does everything else at a high level.
Read full article

Getting to Know: Tadas Sedekerskis

Bogdan Karaicic
@bhoops2016
Lithuanian forward Tadas Sedekerskis discusses his strengths and weaknesses at the U18 European Championship, with accompanying video from the tournament.

Bogdan Karaicic is a video analyst for DraftExpress. Follow him on twitter and check out his website BHoops.com for more video breakdowns. He will be breaking down the NBA draft in digital format all year long for us, so check out his archive frequently.
Read full article

Matt Williams
@DraftExpress
-Lithuanian wing Tadas Sedekerskis has long been considered one of the top European prospects in his generation, and he'll have a chance to build on that with a strong showing in Toronto. He has excellent physical tools, ball-handling ability and creativity, giving him plenty of upside to grow into as he matures and hopefully improves his perimeter shooting ability. Averaging 6.8 points and 2.4 rebounds per game playing for Huesca in the Spanish 2nd division, the young swingman has been solid playing against players significantly older than he is, but is shooting just 29% from beyond the arc.
Read full article

Strengths:
-Very interesting physical profile
-Great size for a wing at 6-8 or possibly 6-9.
-Excellent frame
-Good athlete. Can play above the rim. Strong first step. Smooth and fluid with movements.
-Can create shots for himself and others.
-Good ball-handler. Brings ball up at times, initiates offense
-Smooth and fluid with body control.
-Nice footwork on drives or attacking closeouts. Can execute spin-moves
-Can play pick and roll
-Solid passer. Unselfish. Finds open man, sometimes in impressive fashion
-Intelligent player
-Can post up smaller players
-Shows potential as an outside shooter. Made 38% of 3-pointers in Spain this past season
-Career 80% free throw shooter
-Good rebounder for position
-Competes on defense.
-Has already seen some spot minutes at the ACB level with Vitoria

Weaknesses:
-Not a great outside shooter. Jumper has a bit of a hitch, some wasted motion
-Career 33% 3-point shooter so far
-Has room to improve defensively, especially guarding the wing. Little bit upright in stance. Gets posted up. Bites on fakes.

Outlook: One of the biggest talents to come out of Lithuania in the last few years. Guard skills with forward size. Big enough to play some power forward, but is very versatile and can do different things with the ball. Rights are owned by Vitoria, who loaned him to the Spanish third division last season, where he saw solid playing time. Clear-cut NBA talent.
Read full article

DraftExpress
@DraftExpress
An interview with 6-8 Lithuanian wing Tadas Sedekerskis at the 2015 FIBA U18 European Championship in Volos, Greece.