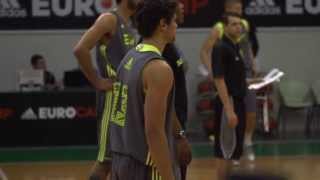 After somewhat underwhelming performances over the course of 2011 at the Nike Hoop Summit in April, the adidas EuroCamp in June and the FIBA Under-19 World Championships in July, few would have expected Raul Neto to emerge as one of the most productive young players in Europe in 2012. That's exactly what he's done playing in the ultra-competitive ACB, on a playoff contending team no less, seeing a solid 18 minutes per-game.

Neto played just a single contest here in Barcelona, a loss to Caja Laboral, but was able to show quite a bit in his 24 minutes of action, both good and bad. Reviewing the film of his 21-game season thus far, his performance seems to be fairly representative of the kind of year he's had, complete with abundant highs and lows.

Measured in a few different places (Hoop Summit, Treviso) around 6-1 in shoes, with an average 6-2 wingspan, Neto is not the biggest or longest point guard you'll find. He's done an excellent job with his frame, though, appearing to have bulked up significantly, particularly in the upper body.

Athletically, Neto is a class above most European guards, showing terrific speed in the open floor and a very quick first step. This, combined with his aggressive nature, allows him to create his own shot exceedingly well, which he seems to have quite a bit of freedom to do in head coach Sito Alonso's up-tempo, high-scoring offense. This perhaps isn't a surprise considering Alonso is the former coach of Ricky Rubio and Rudy Fernandez in DKV Joventut, but it's still fairly unique in European, and especially Spanish, basketball.

Neto does a good job creating high percentage shots inside the paint and getting to the free throw line, being particularly dangerous in transition, where he likes to attack retreating defenses. He possesses strong footwork and ball-handling skills, as well as the ability to change speeds on the pick and roll. Extremely aggressive with the ball in his hands, he attacks the rim ferociously, finishing extremely well around the basket, sometimes through contact, despite his average size and leaping ability. He also has a very nice tear-drop in his arsenal, which he's been converting at a very high rate this season.

While he's a very effective slasher, Neto's perimeter shooting needs work, as he's only converted 12 of his 41 jumpers (29%) on the season. He's able to make shots from behind the 3-point line on occasion (6/23 this season) with his feet set, but really struggles off the dribble, not showing the ability to pull-up in the mid-range area if opposing defenses close off the paint.

As a point guard, Neto shows clear strengths and weaknesses. On one hand he's a confident and creative player who can get to spots with the ball and find the open man unselfishly in drive and dish situations, sometimes in highlight reel fashion. On the other hand, he's not consistent at all with his decision making yet, as evidenced by his 36/31 assist to turnover ratio thus far this season. He looks very careless with the ball at times, over-dribbling and trying to make spectacular plays, which is something that should improve in time with added experience and maturity.

Defensively, Neto has been very effective thus far, which is part of the reason he's been able to carve out such an important role in the ACB at his age. He's extremely aggressive on this end of the floor too, putting excellent pressure on the ball and getting right up in his opponents fearlessly. He has quick feet and good hands, helping him rank in the top-5 in the ACB in steals per-40 minutes this season.

Neto's aggressiveness and lack of size, length and experience can get exposed on occasion by some of the extremely high quality guards that are found in the ACB, but considering his age (19) and the fact that this is his first season playing outside of his home country of Brazil, it's difficult not to be impressed by the toughness and competitiveness he's shown.

It will be interesting to see how Neto progresses from here and whether he can continue to build on his successful rookie season in the ACB next year and beyond. His quickness and aggressive style of play on both ends of the floor would seemingly translate very well to the NBA, which makes him a prospect to keep an eye on moving forward.
Read full article

Raul Neto came into the 2011 Nike Hoop Summit with some recognition from those who saw him last summer at the FIBA Americas U-18 Championships in San Antonio, where he led Brazil the Finals and a loss to Team USA. He also was a member of Brazil's senior squad this summer, which allowed him the outstanding opportunity to travel with them to the World Championships in Turkey last August, where he mostly observed from the bench.

Raulzinho arrived a day late for practices and wasn't overly impressive during most of his week in Portland, but he finished fairly strong, dishing out 4 assists while not committing a single turnover in 17 minutes of action during the game on Saturday night.

From a physical standpoint, Neto possesses a lean, defined frame at his age at 6'2 and 165 pounds with only 4.8% body fat. He showed very good speed as well, always looking to push the ball up the floor and showing nice change of speed and direction dribbles.

Neto's decision-making skills looked pretty questionable at times during practice, often over-penetrating, leading to turnovers. It's safe to say that he still lacks a good amount of high-level experience at this point, even if his talent was fairly evident at times. He did show a nice array of runners and floaters in the lane, but they weren't falling with much success throughout the week.

Neto's jumper is fairly streaky at this point as well, which really limits his efficiency on the offensive end. He has a decent stroke and looks comfortable pulling up off the dribble, so he has a chance to develop into a reliable shooter with time and repetition, something we saw in small glimpses at times in Portland.

Neto showed some promise on the defensive end, as he competes hard, moves pretty well laterally, has quick hands, and good anticipation skills. He needs to be more consistent on this end, though, which may come down the road with more experience against high-level competition.

Although there are still quite a few holes in Neto's game at this stage, he is only 18 years and shows some potential. We'll likely be checking in with him again down the road. The next step in his evolution will likely be to find a good team in Europe where he can continue to develop his game and garner experience, as he's probably not quite talented enough physically to make the jump to the NBA straight from Brazil, like some of his country-mates have over the past few years.
Read full article

Jonathan Givony
@DraftExpress
The engine of the Brazilian team that made the Finals of this FIBA Americas tournament, 6-2 point guard Raul Neto (full name : Raul Togni Neto, also known as Raulzinho) saw solid playing time at the professional level this season with Minas in the Brazilian first division.

Raul was pretty up and down throughout this tournament. On one hand, he exploded for an outstanding 34-point, 8-rebound, 7-assist, 2-turnover performance against Canada. On the other hand, he was unimpressive in other outings (the Argentina game, for example).

Raul has all the physical attributes to develop into an excellent player down the road. He stands about 6-2, has a nice frame and shows impressive athleticism. He's fast in the open floor and shifty with the ball, and he is capable of changing speeds nicely, making him extremely effective in transition.

Offensively, Raul is a capable shot creator in the half-court thanks to a strong first step and excellent ball-handling skills. He had some impressive moments in the tournament, executing crossovers and finishing around the basket with pretty floaters. He can shoot the ball with his feet set from the perimeter and can make shots off the dribble as well.

His playmaking skills are a mixed bag. He makes some terrific passes in the half-court, but he is also prone to tunnel vision, driving the lane and missing open teammates on the perimeter. He's wild at times, too, coughing the ball up a little more than you'd like at times. This is not a huge surprise considering his age, but is something he needs to work on down the road.

Defensively, Raul's fundamentals are average, but he shows excellent anticipation skills. He gets into passing lanes well and comes up with plenty of rebounds.

For Raul to reach his full potential, he'll have to continue to play against better competition in a structured environment, something he may or may not be able to do in the Brazilian league. The son of a coach, Raul's upside looks excellent. He'll be an interesting player to follow over the next few years.
Read full article