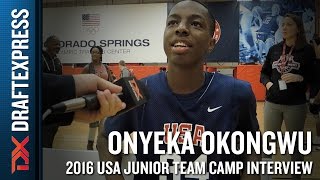 Strengths
-Outstanding frame for a 15-year-old. Strong legs and upper body that still has room to grow. Big hands, super long arms. Big standing reach.
-Impressive agility for his size. Mobile running the floor. Excellent coordination on spin moves. Dodges help defenders with side steps. Quick off of his feet.
-Shows potential as a pick and roll finisher. Light on his feet diving to the rim. Solid hands. Not afraid of physicality on offense. Can finish above the rim in space.
-Decent foundation as a post scorer for his age  1.1 points per possession in 16 Adidas Gauntlet games. Can inside pivot, face up, spin and finish on post ups. Fairly crisp footwork for his age, loves spin moves. Able to finish touch shots around the rim.
-Not a stretch big but has nice touch on short-range jumpers. Should be able to extend his range in time. Ball comes out cleanly with solid rotation.
-Crashes the offensive glass at a decent rate, especially when going after his own misses.
-Impressive defensive potential given his mobility, frame and length. Shows flashes of toughness and competitiveness. Does a nice job of staying down on fakes. Has the footwork to step out and defend the perimeter as he gains experience. Moves well laterally.
-Legitimate rim protector potential thanks to his tools and timing  2.4 blocks per 40 minutes. Excellent verticality around the rim. Super long arms. Recovers quickly if beat on the perimeter. Can stand his ground on the block and alter shots as a primary defender.
-Good instincts in the passing lanes  1.2 steals per 40 minutes.

Weaknesses
-More long and mobile than freaky explosive.
-Still quite raw offensively  10.8 points per 40 minutes in 16 games in the DraftExpress database. Moves on the block aren't that instinctual. Very reliant on right hand jump hooks and push shots. Super right hand dominant in the paint.
-Poor lower body mechanics on his jumper. Shoots a complete set shot without a ton of fluidity to it despite decent touch and wrist action.
-Doesn't have a great feel for the game at this stage  0.8 assists per 40 minutes in 16 games in the DraftExpress database. Forces up predetermined shots out of the post. Doesn't see the floor all that well.
-Lacks perimeter skills. Can improve his ability to play dribble handoff and put it down in a straight line. More of a 6' 9 center at this stage.
-Impressive potential and timing on defense but isn't all that comfortable stepping away from the rim with regularity. Slow to get out to stretch bigs. Doesn't fully sit down in a stance on the perimeter. Likes to reach.
-Not quite the rebounder he could be  8.8 per 40 minutes. A bit more focused on blocking shots or contesting jumpers and leaking out.
-Motor comes and goes a little bit at the AAU level. Doesn't always run the floor as hard as he could.

Outlook
Just 15, Okongwu proved to be one of the more intriguing long-term prospects at the camp thanks to his physical tools, defensive potential and flashes of offensive skill. Okongwu emerged on the national scene while playing a key role as a rim protector and finisher for an undefeated Chino Hills High School team that was led by highly touted point guard Lonzo Ball. Okongwu put together a solid Adidas Nations considering his age and should eventually develop into one of the top big man prospects in the 2019 high school class. From an NBA perspective, Okongwu is most certainly worth tracking as he should develop into a tremendous interior and perimeter defender while he continues to hone his offensive skill set. All in all Okongwu is a high level prospect that coaches and NBA scouts alike will certainly have to keep an eye on.
Read full article