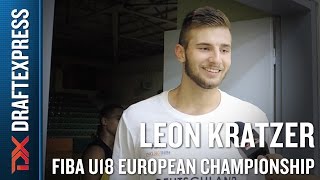 DraftExpress
@DraftExpress
-19-year-old German center Leon Kratzer put together a solid camp, while also measuring 6' 10.75in shoes with a strong 249 pound-frame topped off by a 7' 2 wingspan and 9' 1.5 standing reach, very sufficient measurements for a center prospect. There isn't a whole lot of flash to Kratzer's game but he's very effective.

The Bamberg product is a big-time rebounder who uses his physicality to carve out space inside the paint both on the offensive and defensive glass. He displays an above average compete level and good instincts pursuing the ball off the rim, using his mobility to chase down rebounds outside of his area. He's able to use his developed frame to finish through contact and body up as a post defender.

All in all, Kratzer is fairly limited as a scorer and defender, as he doesn't have great touch or court vision, and is an average athlete in terms of lateral quickness and leaping ability, preventing him from bringing much to the table as a finisher and rim protector. With that said, Kratzer does a great job of staying in his lane and sticking to his strengths to add value. His upside is a bit limited by some of his shortcomings, but with the Bayreuth native is worth keeping an eye on as an energy rebounder who has the strength and length to impact the game.
Read full article

Strengths:
-7-footer with a very well developed frame
-Tremendous offensive rebounder (7.7 per-40).
-Uses big body to move players around in the post. Constantly in the mix for loose balls
-Doesn't need any plays run for him. Finds ways to score via the offensive glass
-Can establish very deep post position. Good target for drop-off passes.

Weaknesses:
-Plays primarily below the rim. Will miss some easy looks around the basket at times. Career 53% 2P% at FIBA level. Not great considering where his looks come from
-Does not possess a very high skill-level. Struggles when forced to do anything complex offensively outside of five feet.
-Has a rudimentary post game. Footwork is not very advanced. Lacks counter moves. Needs to improve off hand, touch. Lacks some patience and feel at times
-Struggles to pass out of double teams. Career 24 assists total in 1200+ minutes (one per 51 minutes) compared with 87 turnovers.
-Exceptionally poor free throw shooter. Has a very ugly looking stroke.
-Shot 32% from free throw line at U18s. Career 40% free throw shooter
-Average defender. Intensity level comes and goes. Late on rotations. Doesn't always get a hand up on shooters. Struggles to rotate out to perimeter. Gets posted up and scored on more than you'd like. Not likely to be a major rim protector at the pro level.

Outlook: Bruising big man with a very developed frame. Tremendous rebounder, particularly on the offensive glass. A cross between Aron Baynes and Furkan Aldemir? Is his dominance on the glass a product of junior competition, or can he translate his rebounding prowess to the senior level as well?
Read full article

DraftExpress
@DraftExpress
An interview with 7-foot German big man Leon Kratzer at the 2015 FIBA U18 European Championship in Volos, Greece.