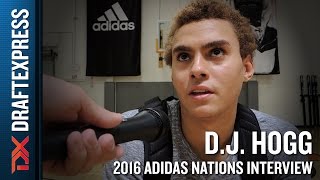 Arguably the most highly regarded member of Texas A&M's vaunted 2015 recruiting class, which ultimately included five top-100 prospects, D.J. Hogg earned a spot in Billy Kennedy's rotation as a true freshman. Averaging 6.2 points and 2.9 rebounds over 18.2 minutes per game en route to SEC All-Rookie Team honors, Hogg followed up his freshman campaign with a strong showing in the highly competitive counselor games at adidas Nations, solidifying himself as a player to watch moving forward.

Standing 6'9 with a 6'9 wingspan and an improving frame, the Plano West HS (TX) product is a mixed bag from a physical perspective. He has very good size for his position, but lacks great length and would benefit from continuing to some additional muscle to his frame He's an impressive leaper off one foot when he can gather a head of steam, but lacks a degree of quickness attacking off the dribble as he's a fluid, but not freakish, overall athlete from an NBA perspective.

Primarily serving as a backup to Danuel House at the small forward position, but also sliding up to play a bit of power forward in smaller lineups a year ago, Hogg's size is a plus for the Aggies, but it doesn't factor all that prominently into how he makes an impact offensively. Rather, its Hogg's ability to knock down jump shots and make sound decisions with the ball that helped him carve out the minor role he played last season. Doing most of his damage spotting up on the perimeter and running the floor in transition,

Developing a reputation as a prolific jump shooter early in his prep career, knocking down a game-winning 19-footer at the buzzer to win a state championship as a high school senior, and connecting on a very serviceable 39% of his catch and shoot jump shots a year ago according to Synergy Sports Technology, Hogg is a very reliable set shooter with excellent touch from the perimeter. Shooting the ball with compact, consistent mechanics, Hogg does a nice job setting his feet quickly and getting his shot off in rhythm, even when running off screens or rising up over defensive pressure. He made just 33% of his shots from beyond the arc and 65% of his shots from the line last season, but appears very capable of improving on those numbers as a sophomore.

Hogg's ability to improve his shooting efficiency is important, as some 70% of his total shot attempts last season came from the perimeter. He has a terrific skill level and nice scoring instincts, but struggled when asked to create his own shot, as his lack of burst made is difficult for him to create separation of get all the way to the rim. Able to attack closeouts with some success and draw his defender into the air from time to time with a convincing shot fake, Hogg isn't incapable of attacking off the bounce as he's very smooth with the ball in his hands, but often drives to pass rather than score, doesn't seem very decisive or confident as he probes the defense, and has a lot of room to improve as a shot creator at the college level.

To Hogg's credit, he didn't force much offense to the rim year ago, picking and choosing his spots and being far more likely to fire up a deep jumper than venture inside. An opportunistic scorer off of cuts and fast break opportunities, the Texas native shows far more pop as a leaper than one might assume watching him play otherwise, but doesn't handle contact particularly well or always go up strong inside.

Defensively, Hogg has a lot of room to grow. He has some instincts, but lacks a degree of physicality, helps too eagerly at times giving up some easy jump shots, and lacks elite quickness staying in front of smaller players. He does compete with some amount of urgency, but needs to play stronger and make better decisions on this end.

Still very early in his college career, D.J. Hogg is a gifted shooter with excellent size for his position, two things that will surely work in his favor in the coming years. With Danuel House and Jalen Jones out of the picture, Hogg will have a massive opportunity to step up for the Aggies this season in their absence. A confident scorer with a strong feel for the game, it will be worth watching what kind of mark Hogg can make this year as he'll have his first real chance to establish himself as a bonafide NBA prospect.
Read full article